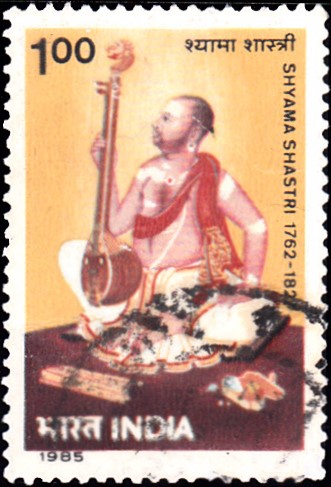 A commemorative postage stamp on Talaprasthara Syama Sastri, oldest among the Trinity of Carnatic music, with Tyagaraja and Muthuswami Dikshitar :

Issued for : The Department of Posts is privileged to issue a commemorative stamp on Shyama Shastri, a great artist of India.

Description of Designs : The 100 p. multicolour stamp of Shyama Shastri has been designed by India Security Press, Nashik Road. The First Day Cover and the cancellation designs have been prepared by Nenu Bagga.