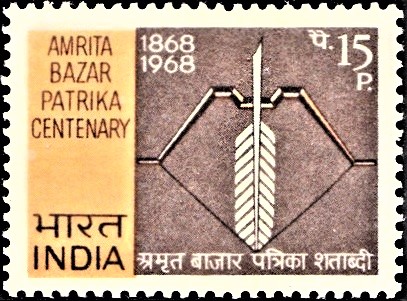 A commemorative postage stamp on the Centenary of the Amrita Bazar Patrika, an Indian Bengali newspaper, founded by Sisir Kumar Ghose and Moti Lal Ghosh (also first editor) in 1868 :

Issued for : Today, “Amrita Bazar Patrika” is one of the foremost national dailies, a position which it owes as much to its pioneering founders as to the patriotic fervour of the Indian people. The Posts and Telegraphs Department is glad to recognise the services of this great Indian-owned newspaper by bringing out a commemorative postage stamp to mark its centenary.

Design : The design of the stamp is horizontal and depicts a bow and a quill used in place of the arrow, the symbol for Amrita Bazar Patrika Centenary.