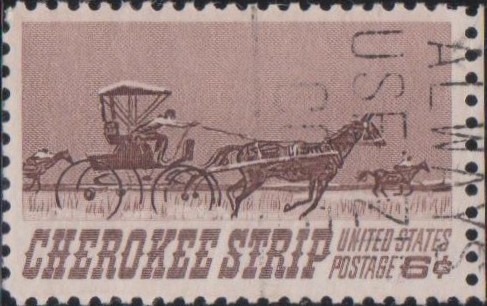 A commemorative postage stamp on the 75th Anniversary of the Opening of the Cherokee Strip to Settlers, September 16, 1893 :

Issued for : The white settlers’ rush into the Cherokee Strip is the one commemorated in this stamp. The price approved by Congress for payment to the Cherokees was $1.40 per acre. On September 16, 1893, a horde of 100,000 whites on horses or in buggies, poised at the Kansas–Oklahoma border, began on signal the dust-raising scramble to claim 40,000 homesteads. The U.S. 6c stamp, designed by Norman Todhunter, was released October 15, 1968 in Ponca City, Oklahoma in honor of the 75th anniversary of a dramatic event in the white man’s sweep westward.