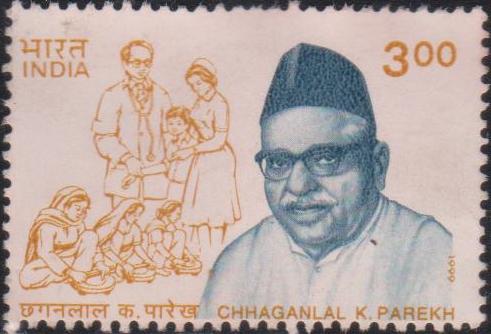 A commemorative postage stamp on Chhagan Bapa, a noted philanthropist and social worker, worked for upliftment of poor & women [a part of the series ‘India’s March towards Progress and Development‘] :

Issued for : The Indian nationalist movement had asserted the right of the Indian people to shape their own destiny. The Constitution which came in force on 26th January 1950, was designed to be an instrument of India’s social and economic transformation. A nascent nation embarked on its march towards progress and socio-economic development. Leaders with foresight and a desire to improve the lot of the common people played crucial roles in different regions in the country’s achievements. The Department of Posts issues a set of four stamps in tribute to four visionaries of modern India, namely Dr. T.M.A. Pai, A.D. Shroff, A.B. Walawalkar and Chhaganlal K. Parekh, who have in their various ways contributed to India’s march towards progress and development.