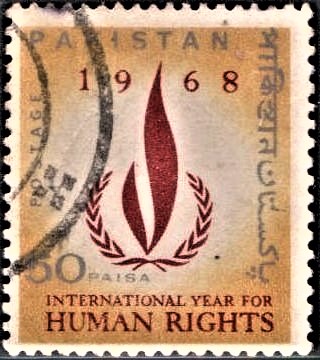 Complete set of 2 nos. of commemorative postage stamp on the International Year of Human Rights : 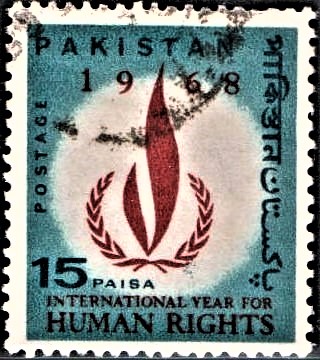 Issued for : The United Nations General Assembly, noting that the year 1968 would be the 20th Anniversary of the adoption and proclamation of the Universal Declaration of Human Rights, designated that year as “International Year for Human Rights”. To commemorate this important event, Pakistan Post Office, alongwith a number of other countries, is bringing out two postage stamps of 15 and 50 Paisa denominations.

Design : The Central feature of the stamps portrays the flame, which has been adopted as the symbol of human rights, encircled at the base by the wreath of the United Nations, printed in red on both denominations. The year ‘1968’ appears at the summit of the flame whilst the wording “International Year for Human Rights” is printed at the foot of the stamps. This wording is also printed in red on both denominations. The word “Pakistan” in English is printed at the top of the stamps while the Bengali and Urdu versions appear vertically on the right. The denominations 15 and 50 Paisa respectively appear at bottom left of the stamps immediately below the wreath while word “postage” appears vertically at the top left.