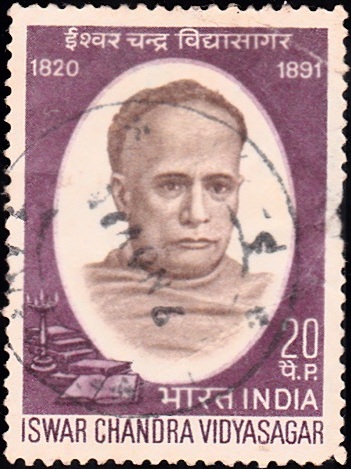 A commemorative postage stamp on the 150th Birth Anniversary of Ishwar Chandra Vidyasagar, an Indian Bengali polymath and a key figure of Bengal Renaissance :

Issued for : The Post and Telegraph Department is happy to bring out a special commemorative stamp in honour of Ishwar Chandra Vidyasagar, the great educationist and social reformer, on the occasion of his 150th birth anniversary.

Description of Design : The design of the stamp is vertical and depicts a portrait of Ishwar Chandra Vidyasagar in the middle of the stamp against an oval background. On the left side bottom, some books and a lamp, the symbol of education are shown.

Film (based on his works) : Bhranti Bilas

One wonders how God, in the process of producing forty million Bengalis, produced a man!” – Rabindranath Tagore

received the title “Vidyasagar” (in Sanskrit, “vidya” means “knowledge” and “sagar “means “ocean”, i.e., Ocean of Knowledge) from Sanskrit College, Calcutta (from where he graduated), due to his excellent performance in Sanskrit Studies and Philosophy