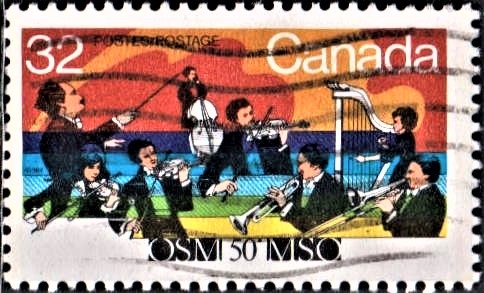 Design : To highlight the musicality of this fiftieth anniversary, the stamp design is built on the idea of a musical score. Created by Pierre Kohler of Montreal, with an illustration by Montreal artist Jacques Delisle, it shows typical orchestra members in concert, interspersed like notes among the five-line staff used for musical notation.

The First Day Cover features a photograph of Wilfrid Pelletier with the full orchestra at Plateau Hall in 1934. On the first day of issue, the stamp on this First Day Cover will be cancelled with a special die bearing a musical motif.