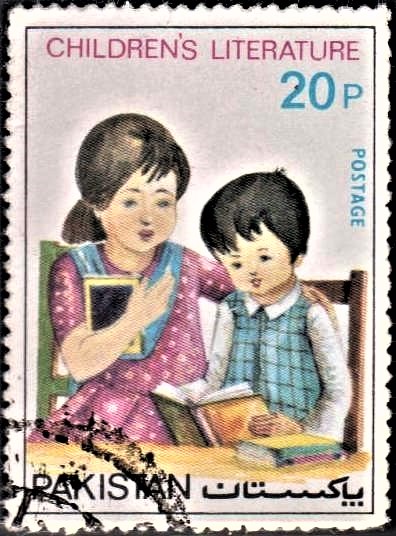 A commemorative postage stamp on the Children’s Literature :

Issued for : As part of a programme to promote children’s literature Pakistan Post office is issuing a special stamp of 20 Paisa on 15.12.1976.

Description : Stamp is vertical in format. Two Children, a boy and a girl are shown absorbed in reading. The Caption “CHILDREN’S LITERATURE” appears at the top of the stamp in red.

The denomination figure “20p” appears in blue in the top right corner while the word ‘POSTAGE’ appears below it along the right side of the stamp.

‘PAKISTAN‘ in English and Urdu appears in black at the bottom of the stamp. A thin black line encloses the stamp from all sides.