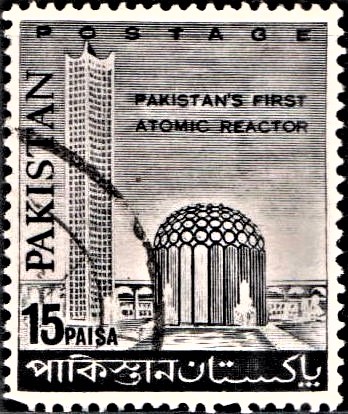 A commemorative postage stamp on the First Atomic Reactor of Pakistan at Islamabad :

Issued for : To commemorate the First Atomic Reactor of Pakistan, the Pakistan Post Office is issuing a postage stamp of 15 Paisa denomination on the 30th April, 1966.

Design : The main feature of the stamp is the Atomic Reactor Building at Islamabad. The Tower appears on the left side of the stamp while the dome on the right side. The fountain and the pool could be seen in the foreground. The word “Postage” in English appears at the top in small letters and word “Pakistan” in English is shown at the top left side. The word “Pakistan” in Urdu and Bengali appears in reverse at the bottom black panel. The denomination i.e. ’15 Paisa’ is shown in the left corner of the stamp. The wordings “Pakistan’s First Atomic Reactor” appear in the open space at the top of the dome.