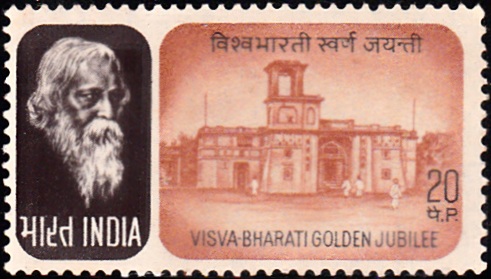 A commemorative postage stamp on the Golden Jubilee of Vishwa Bharati University, a public central university in Shantiniketan, founded by Rabindranath Tagore in 1921 :

Issued for : The Visva-Bharati completed 50 years of its very useful service to the nation in 1971. The P&T Department feel privileged in commemorating the Golden Jubilee of this national institution by bringing out a special postage stamp to mark the occasion.

Description of Design : The design of the stamp is horizontal and depicts a portrait of Rabindranath Tagore on the left and the Visva-Bharati building on the right hand side of the portrait.

The design of the stamp is adapted from the original prepared by Shri Charanjit Lal, Artist, P&T Directorate, New Delhi.