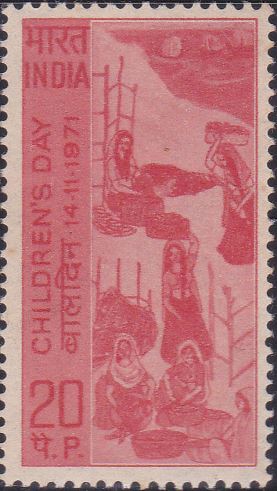 Issued for : The P&T Department has been actively associated with the celebrations of the Children’s Day since 1957. It is once again the privilege of the P&T Department to bring out a special commemorative stamp to focus the attention of the public on this very important national resource – the budding youngsters. The stamp which is being brought out this year shows a Nehru Gold Medal winning entry by Miss Geeta Gupta in a recent “on the spot” painting competition for children, sponsored by Shankar‘s Weekly. The design adopted on the First Day Cover, which is being issued on the occasion, is based on a prize winning entry submitted by Miss Vidooshi Sharma in the Shankar‘s International Children’s Competition held in 1969.

Description of Design : The design of the stamp is vertical and depicts a prize winning painting by Miss Geeta Gupta in a competition for children sponsored by Shankar‘s Weekly.