A commemorative postage stamp on the Death Centenary of Maulana Md. Qasim, founder of  Darul Uloom Deoband, a Islamic university in India and birthplace of Sunni Deobandi Islamic movement : 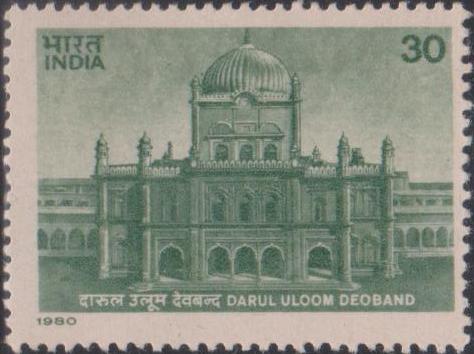 Issued for : Maulana Muhammad Qasim died at the early age of 48 in 1880, almost a hundred years ago. The Indian P&T Department is privileged to issue a special stamp to commemorate Darul-Uloom, the institution that is his everlasting memorial.

Description of Designs : The stamp depicts a view of the main building of Darul-Uloom, Deoband which houses Darul–Tafseer and Darul–Hadis.

The first day cover, designed by the India Security Press, shows a view of the building of Darul-Ifta, one of the departments of Darul-Uloom, Deoband.

Designed by : India Security Press, based on a Photograph by Shri Charanjit Lal.