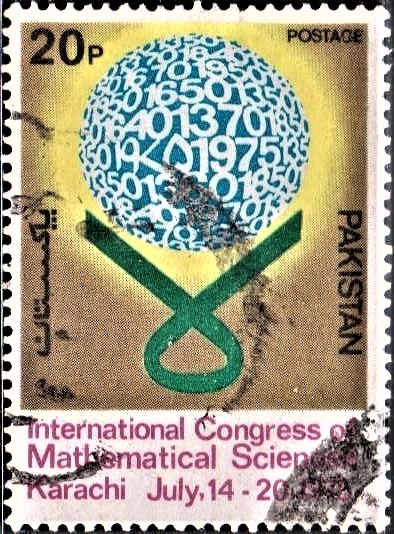 A commemorative postage stamp on the International Conference of Mathematical Sciences :

Issued for : On the occasion of the International Congress of Mathematical Sciences being held in Pakistan from July 14th thru’ July 20th, 1975, the Pakistan Post Office is issuing a Commemorative Stamp.

Description of Design : The Stamp is vertical in format. A blue colour globe composed of figures in Urdu and English (in white) representing years, appear at the top centre of the stamp against a vignetted background of golden colour.

The globe is supported by a green colour symbol “Ϫ” which is the Algebraic Expression representing invention and contribution of Arabs to Mathematical Sciences. This expression is equivalent to “X” of Algebra in English.

The wording “International Congress of Mathematical Sciences” alongwith “Karachi, July 14-20, 1975″ appears at the bottom of stamp in Red colour.

The denomination figure ’20p’ appears in the top left corner and the word “Postage” in the top right corner in black.

“PAKISTAN” in Urdu and English appears in black on either side of figure “Ϫ” near the edges of the stamp.