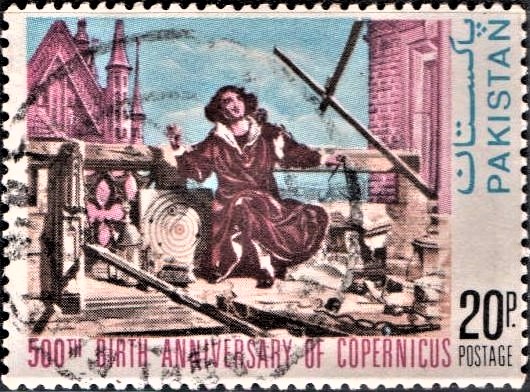 A commemorative postage stamp on the 500th Birth Anniversary of Nicolaus Kopernikus :

Design : The stamp which is horizontal in format and depicts the famous Polish astronomer Copernicus whose 500th Birth Anniversary is being celebrated all over the world.

The design of the stamp is basically based on a painting in which Copernicus is shown in his observatory making some astronomical observations. All sort of astronomical instruments, maps, telescope and books are scattered around him. A church and other buildings of the city against a blue sky can be seen in the back-ground. The caption “500th Birth Anniversary of Copernicus” appears in red at the fixit of the picture. The word ‘Pakistan‘ in Urdu and English appears in Blue Colour at the top in vertical position in the white panel at right side of the picture. The denomination “20 Paisa” with “Postage” underneath appear at the foot of this panel in black.

Died on May 24, 1543 at Frombork (Frauenburg), Prince–Bishopric of Warmia, Royal Prussia, Kingdom of Poland