Pakistan on Excavations of Moenjodaro 1973 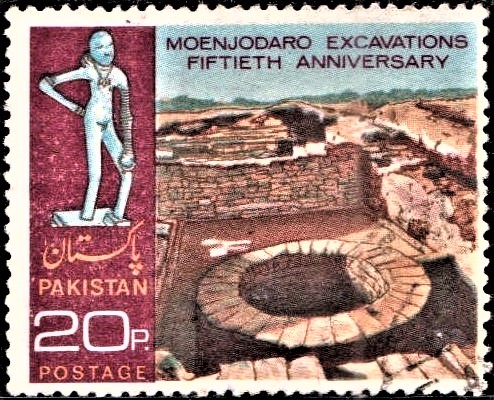 A commemorative postage stamp on the 50th Anniversary of the Excavations of Mohenjodaro :

Design : The stamp is horizontal in format. One of the public baths of Moenjodaro is the subject of the design which is shown in the square on the right side of the stamp in Yellow, Brown and Blue colours. The caption “Moenjodaro Excavations Fiftieth Anniversary” appears in red colour at top against the blue sky of the site. The figure of the Dancing girl of the archaeological finds of the excavations is depicted at top in red panel at left in blue colour. The word ‘Pakistan‘ in Urdu and English appear in Yellow beneath that figure. The denomination ’20 Paisa’ appears below in white with the word ‘Postage’ in yellow colour at the bottom.