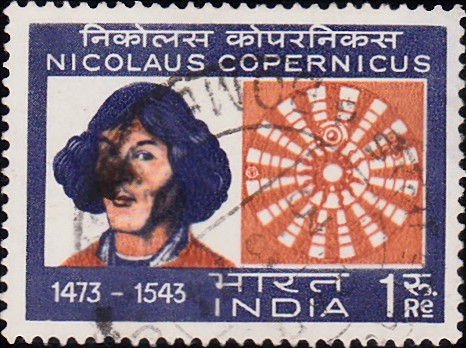 A commemorative postage stamp on the quin-centenary of Nicolaus Copernicus, an European Renaissance-era Catholic cleric, mathematician and astronomer, presented Heliocentrism [a part of the series ‘Centenary Stamps Series‘] :

Description of Design : The stamp is horizontal and depicts the portrait of Nicolaus Copernicus. By the side of the portrait the Heliocentric Universe is shown.

Died on May 24, 1543 at Frombork (Frauenburg), Prince–Bishopric of Warmia, Royal Prussia, Kingdom of
Poland