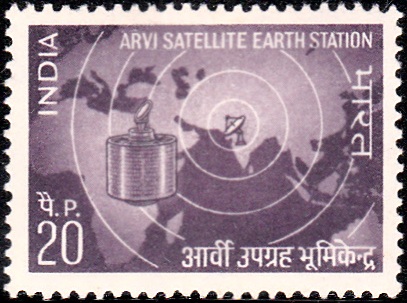 Issued for : The Indian Posts and Telegraphs Department feel privileged in bringing out a postage stamp to commemorate the first anniversary of the earth station at Arvi, which is being dedicated to the nation by the President of India who is also releasing the commemorative stamp. The stamp depicts the “Global Satellite” and the location of the earth station. This station is being named the Vikram Earth Station in memory of the late Dr. Vikram Sarabhai who was primarily responsible for the execution of this sophisticated project by Indian Engineers.

The first day cover being issued on this occasion bears a picture of the antenna at the earth station at Arvi.

Description of Design : The design of the stamp is horizontal and depicts “Global Satellite,” the course of ‘Intelsat III’ in circular lines and ‘Arvi Earth Station.’