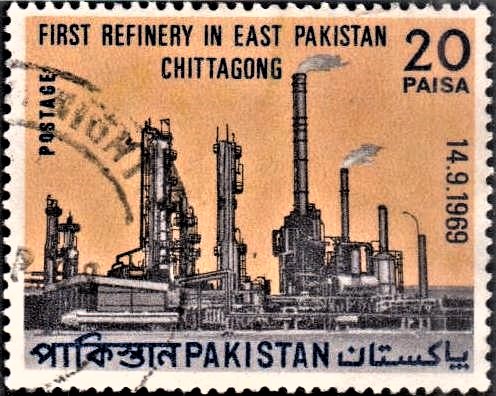 Issued for : The Pakistan Post Office is issuing a stamp of 20 Paisa denomination on September 14, 1969 to mark the completion of the first year of production of the Eastern Refinery Ltd., Chittagong.

Design : The format of the stamp is horizontal. The Refinery has been shown in bluish black colour against a yellow background. The words “FIRST REFINERY IN EAST PAKISTAN CHITTAGONG” appear on the top in dark blue. The denomination “20-Paisa” appears at the right top corner. The word “Postage” appears vertically on the left and the date “14-9-1969” on the right edge of the stamp. The word “Pakistan” in Bengali, English and Urdu appears at the bottom in blue colour.