Pakistan on Economic Commission for Asia and Far East (ECAFE) 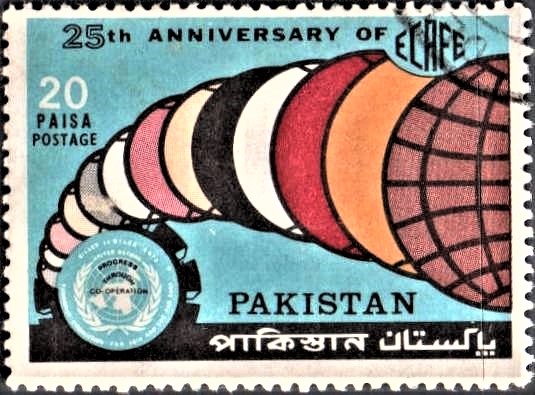 A commemorative postage stamp on the 25th Anniversary of the ECAFE :

Issued for : To mark the 25th Anniversary of the United Nations Economic Commission for Asia and the Far East (ECAFE), the Pakistan Post Office is issuing a Commemorative Postage Stamp of 20-Paisa on 28th March, 1972.

Design : The different races of the world are represented in the design by coloured discs overlapping each other. They are shown to emerge from behind the emblem of ECAFE which appears in white against a blue background. The emblem is contained within the cogwheel of progress which is shown in black. The wording “Progress through Co-operation” appears within this wheel superimposed on the emblem. The word “Pakistan” in Bengali and Urdu appears in the panel at the bottom beside the wheel in reverse while ‘Pakistan‘ in English appear above this panel in black. The words “25th Anniversary of ECAFE” appears in black at the top. Denomination ’20’ appears in reverse in the left hand corner just above the coloured discs with ‘Paisa’ and ‘Postage’ beneath in black.