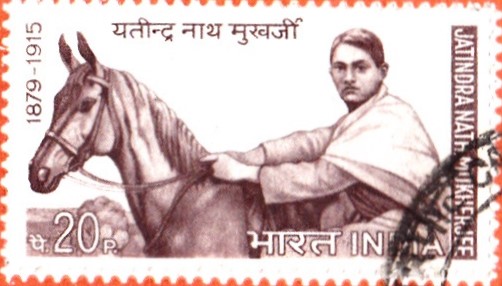 A commemorative postage stamp on the Death Anniversary of Jatindranath Mukhopadhyay (Bagha Jatin), an Indian Bengali revolutionary, a leader of Yugantar party, planned German Plot during World War I against British Raj :

Issued for : The Posts and Telegraphs Department joins the millions in this country in paying its silent homage to the memory of this invincible harbinger of national freedom and glory, by issuing a special commemorative stamp in honour of Jatindra Nath Mukherjee.

Description of Design : The design of the stamp is horizontal and depicts a portrait of Jatindra Nath Mukherjee holding the reins of a horse.

The design is based on the drawing prepared by Shri C. Kar, Principal, Govt. College of Art & Craft, Calcutta.