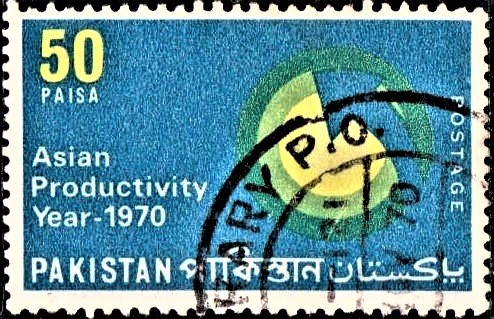 A commemorative postage stamp on the Asian Productivity Organisation (APO) :

Issued for : To commemorate the Asian Productivity Year 1970, Pakistan Post Office is issuing a stamp of 50-Paisa denomination on 18-8-1970.

Design : The format of the stamp is horizontal. The symbol of the Asian Productivity Year, concentric circles with arrow, form the subject of the design. The design implies simply the rise of productivity in the Asian region as indicated by arrow pointing upwards over this part of the globe. The inner circles are pale yellow, the two outer circles are pale green and dark green respectively formed by over lapping blue over yellow. The background and arrow are turquoise blue. The denomination “50” is in yellow and the rest of the wordings i.e. “Asian Productivity Year-1970” the word “Postage” and “Pakistan” in Urdu, Bengali and English appear in reverse.