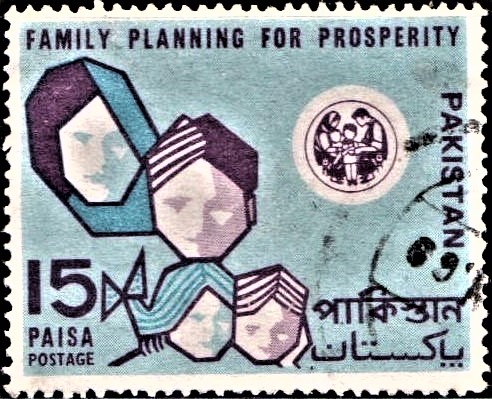 A commemorative postage stamp to publicize Family Planning for Prosperity :

Issued for : The Pakistan post Office is issuing a stamp of 15 Paisa denomination to focus public attention to the concept of Family Planning. The Commemorative Postage Stamp will be available for sale on and from 14th January, 1969 for a period of three months at all important Post Offices, Philatelic Bureaux and Philatelic Counters and also at some of the Pakistan Diplomatic Missions abroad. Thereafter, if the supplies are still available, they will be sold only at the Philatelic Bureaux and Philatelic Counters.

Design : The stamps is horizontal in format. Four figures in abstract representing happy family comprising of parents and two children appear at the left hand side of the stamp in bold outline of Mauve Colour against a blue background. The insignia of ‘Family Planning Division’ appears in mauve colour in a white circle at the top right corner. The entire lettering is in Mauve colour on a blue background. The caption “Family Planning for Prosperity” appears at the top, the word ‘Pakistan’ in English at the right side vertically. ‘Pakistan’ in Bengali and Urdu appears together in the bottom right corner horizontally. The denomination figure ‘15’ appears in the bottom left corner with ‘Paisa’ and ‘Postage’ underneath.