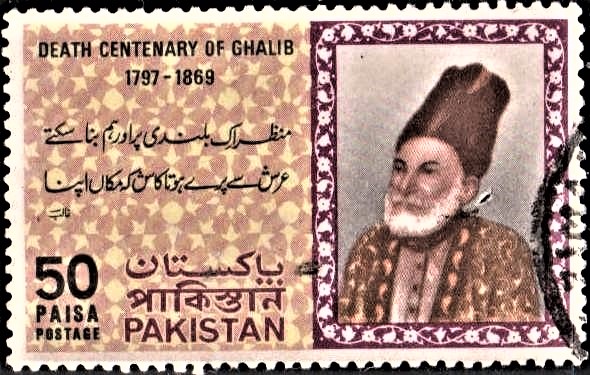 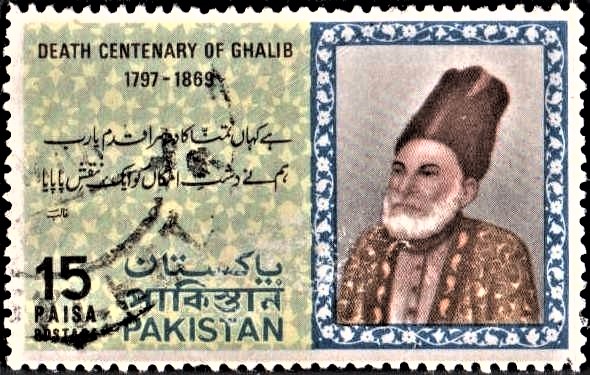 Design :
15 Paisa : The stamps is rectangular in format. It is divided into two portions. The right portion consists of Mirza Ghalib’s portrait in a blue frame enriched with Moghul Floral border in reverse. The left portion is a tinted background of rich geometrical pattern of Moghul origin in yellow and green colours containing all the lettering. The words “Death Centenary of Ghalib 1797-1869” appear at the top in black and in the middle the following urdu verse in black :

Where, O God, does the next step of
Passion lead
The Wilderness of corporeal universe appears
But a foot-print to me.

The denomination figure ‘15’ with ‘Paisa’ and ‘Postage’ underneath appear in black in bottom left corner. The word ‘Pakistan’ in English, Bengali and Urdu appears one above the other at the bottom in blue. The portrait is printed in three colours, orange, black and yellow, the latter colour showing through the embroidery of the dress only. The background of the portrait is grey vignetting off at the top.

50 Paisa : The design of 50 Paisa stamp is the same as of 15 Paisa except that the colour of the frame and the word ‘Pakistan’ in English, Bengali and Urdu appear in purple. The background colour of the left portion is yellow and pink with the following urdu verse in the middle :

A loftier abode we fain had created
O that for us a residence beyond the stars
Had been destined.