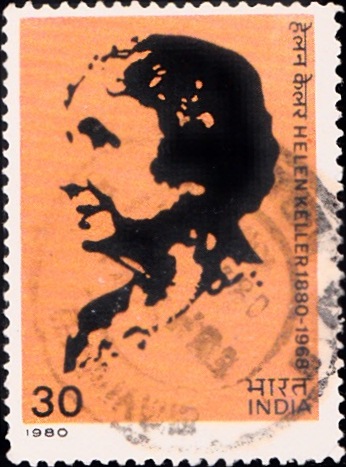 A commemorative postage stamp on the Birth Centenary of Helen Adams Keller, an American author, political activist and lecturer, first deaf-blind person to earn a Bachelor of Arts degree :

Issued for : The Indian Posts and Telegraphs Department feels privileged to issue a special stamp in her honour.

Description of Designs : The stamp depicts a sketch of Helen Keller.

The First Day Cover designed by M.K. Bardhan depicts an artists impression of the determination of visually handicapped person to make useful contribution to the Society with the help of his physical and mental abilities.