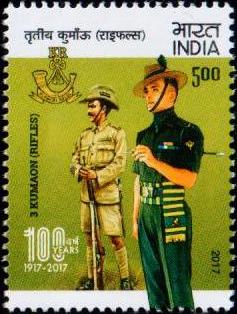 Issued for : In light of the distinguished service rendered by the Battalion to the Nation both in Operational and Peacetime Conditions, Department of Posts is pleased to issue a Commemorative Postage Stamp on 3 Kumaon (Rifles).