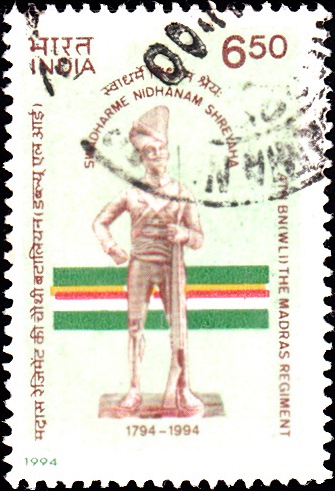 A commemorative postage stamp on the Bicentenary of the 4th Battalion (Wallajahabad Light Infantry), the Madras Regiment, Indian Army:

Issued for : By issuing a postage stamp on the bi-centenary of this Battalion, the Department of Posts commemorates the courageous deeds of its soldiers during war and peace.

Design Credits : The stamp, FDC & Cancellation have been prepared based on the material supplied by 4 Madras (WLI).

Number per issue sheet : 1 Million in sheets of 40