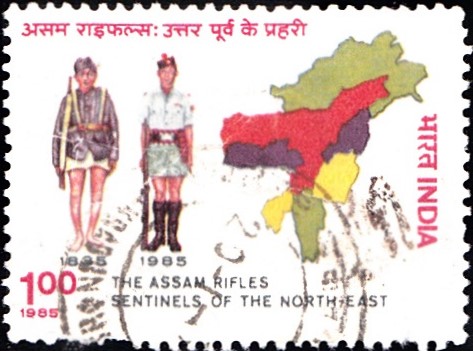 A commemorative postage stamp on the 150th Anniversary of the ‘Sentinels of the North East‘ Assam Rifles, oldest paramilitary force of India :

Description of Design : The one rupee stamp designed by Alka Sharma, shows the North-Eastern Region of the country alongwith soldiers of the Assam Rifles in their uniforms of 1835 and 1985. The first day cover shows troops of the Assam Rifles helping in the evacuation of refugees from Burma during the Second World War. The cancellation and first day cover have been designed by Alka Sharma.