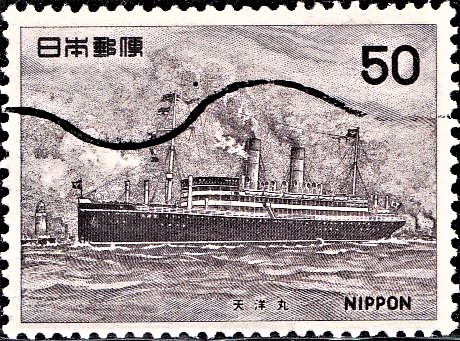 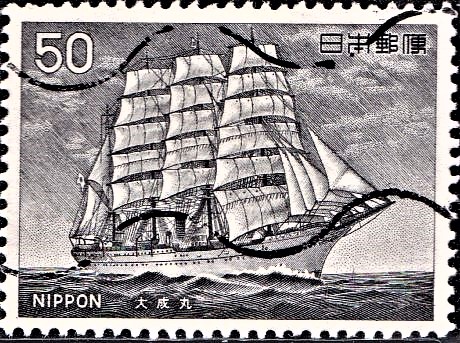 Issued for : As the 4th of the Ship Series two 50 yen postage stamps (se-tenant) will be released featuring “Taisei-maru” and “Tenyo-maru” respectively.

Picture : Taisei-maru was a large barque with 4 masts built in 1903 as navigation training boat attached to the Merchant Marine School (now University). The equipment of the boat was so perfect as to be matchless in the world in those days. It navigated more than 60 times covering more than 600,000 nautical miles in total with more than 4,000 students trained on board it before it sank down in 1945 knocked against a torpedo. It greatly contributed to the marine transportation of Japan. The gross tonnage was 2,287 tons.

Tenyo–maru: After the Russo-Japanese War (1904-5) the average gross tonnage of the English and American passenger ships on the Pacific line increased to 10,000 tons while that of Japanese liners was then 6,000 tons. Under the circumstances, to vie with the western liners the Tokyo Shipping Company built in 1908 the steamer gross tonnage of which was 13,454 tons able to carry 368 passengers. Fed with liquid fuel and equipped with wireless set for the first time in Japan, it had been in the service on the Pacific until it was dissolved in 1933. It was the excellent ship that represented the progress of the shipbuilding technical skill.