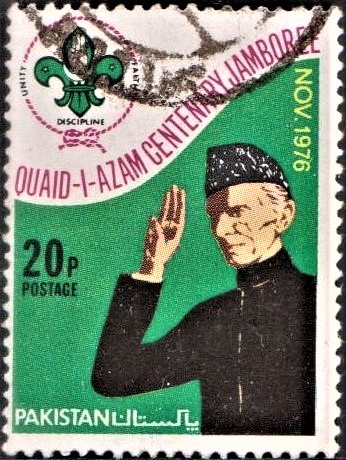 A commemorative postage stamp on Quaid–i–Azam Centenary Jamboree at Lahore :

Description : Stamp is vertical in format. Quaid-i-Azam, clad in black Sherwani and Jinnah Cap is shown taking scout salute at the right side against a dark green background with a curved ending at top bearing the wording “Quaid-i-Azam Centenary Jamboree” in red. The specially designed Scout Jamboree Emblem with the saluting hand in the central leaf and encircled by a rope with the words ‘Unity’, ‘Faith’ and ‘Discipline’ incorporated appears in the top left corner in Green, Red and Black colours. ‘Pakistan‘ in English and Urdu appears in reverse form at the bottom just beside the Quaid‘s portrait. The denomination of ’20P’ with the word ‘Postage’ underneath appears in black at the top left portion of Green background. The date ‘Nov-1976’ appears in yellow in the top right corner of the green background.