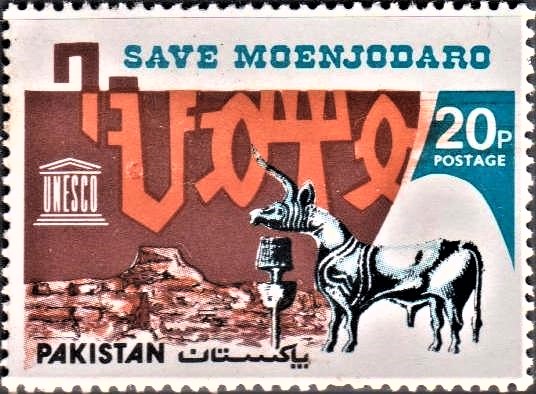 A commemorative postage stamp on the UNESCO Campaign to Save Mohenjo–Daro Excavations :

Issued for : As a part of an international appeal for assistance to preserve Moenjodaro, the Pakistan Post Office in collaboration with the Authority for the Preservation of Moenjodaro (Pakistan) has arranged to bring out a series of commemorative stamps for public motivation. The first issue of the Save Moenjodaro Series consisted of a set of five stamps of different denominations and was brought out on 29th February, 1976. As indicated previously Pakistan Post Office will be issuing a stamp in this series after every three months for a period of one year. Accordingly the second issue is being brought out on 31st May, 1976. This is a 20-Paisa stamp.

Description : The stamp is horizontal in format. The figures in blue and black appearing on the right side of the stamp is a mythological figure taken from a steatite seal of a Unicorn at Moenjodaro. In the background is shown the ruins of Moenjodaro with the stupa of Kushan period in brown and orange colours. Bold and characterized inscription of the Seal appears in orange colour against brown background at the top of the stamp with UNESCO emblem in reverse at left. The caption “Save Moenjodaro” appears in blue at the top of the stamp. The denomination figure ’20 P’ with the word ‘Postage’ underneath appears in reverse in the blue panel at right hand corner. ‘Pakistan‘ in Urdu and English appears in black at the bottom left side of the stamp.