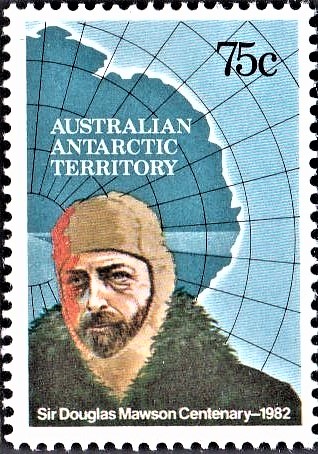 Complete Set of 2 nos of postage stamps on the Birth Centenary of Sir Douglas Mawson, an Australian Antarctic explorer : 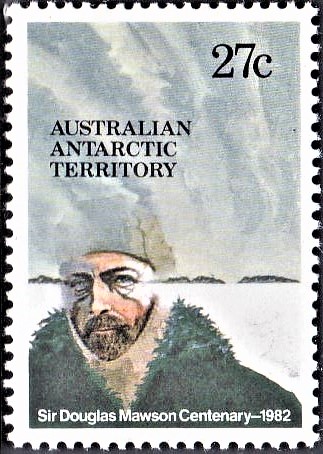 Design : Sir Douglas Mawson, Australia‘s most famous Antarctic explorer, is depicted on the stamps honouring the centenary of his birth, against backgrounds relating to areas of the frozen continent with which his name is so closely associated. On the 27c stamp, a view of the ice plateau inland from Mawson Station stretches to the Masson, David and Casey ranges of the Framnes Mountains on the horizon. A map of the Australian Antarctic Territory forms the background of the 75c stamp.

Designed by : Ray Honisett [Mr. Ray Honisett was born in Perth, Western Australia and studied art at the Perth Technical College. He moved to Melbourne in 1951 where he worked as an illustrator/designer before heading for London in 1955. Mr. Honisett’s first Australian stamp design was a 6c stamp issued in 1970. His 1971 Christmas aerogramme was awarded the 1972 San Gabriele International Prize for Philatelic Art, given annually to the nation which issues the best postal item on a religious subject. In 1979 and again in 1980 he visited the mainland of Antarctica, and on a separate journey in 1980 he visited the Australian Antarctic station at Macquarie Island. Mr. Honisett was employed as a lecturer in illustration at the Royal Melbourne Institute of Technology.]

Born on May 5, 1882 at Shipley, West Yorkshire, England, United Kingdom