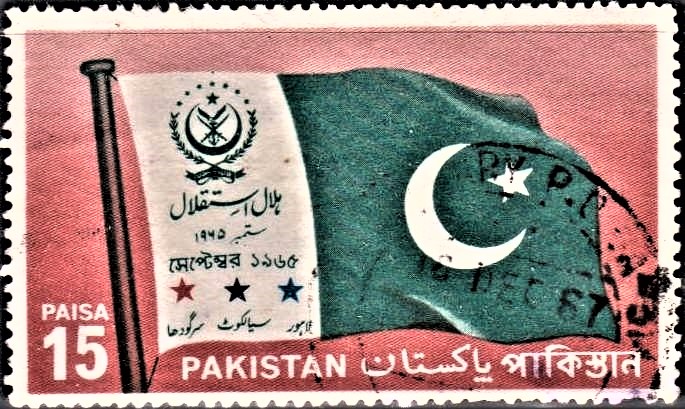 A commemorative postage stamp on the Flag of Valor awarded to the cities of Lahore, Sialkot and Sargodha :

Issued for : To celebrate the award of Hilal-i-Isteqlal to the city of Lahore by the President of Pakistan and to the cities of Sialkot and Sargodha by the Governor of West Pakistan for the unprecedented act of valour, courage and patriotism displayed by the citizens during the Indo-Pakistan War in September, 1965, the Pakistan Post Office is issuing a stamp of 15-Paisa denomination on 15th May, 1967.

Design : The flag of Hilal-i-Isteqlal is shown against a graded background of Vermillion red. The Hilal-i-Isteqlal emblem appears in white portion of the flag at top. Underneath the emblem the word “Hilal-i-Isteqlal” appears in Urdu and below it “September, 1965” in Urdu and Bengali. Below the Bengali lettering appear three Stars in Red, Navy Blue and Light Blue colours representing Army, Navy and Air Force respectively. Under the Light Blue Star is written “Lahore”, under the Navy Blue Star “Sialkot” and under Red Star “Sargodha”. “Pakistan” in Bengali, Urdu and English appears in reverse at the bottom under the flag and the denomination figure “15 Paisa” in left bottom corner in reverse in English.