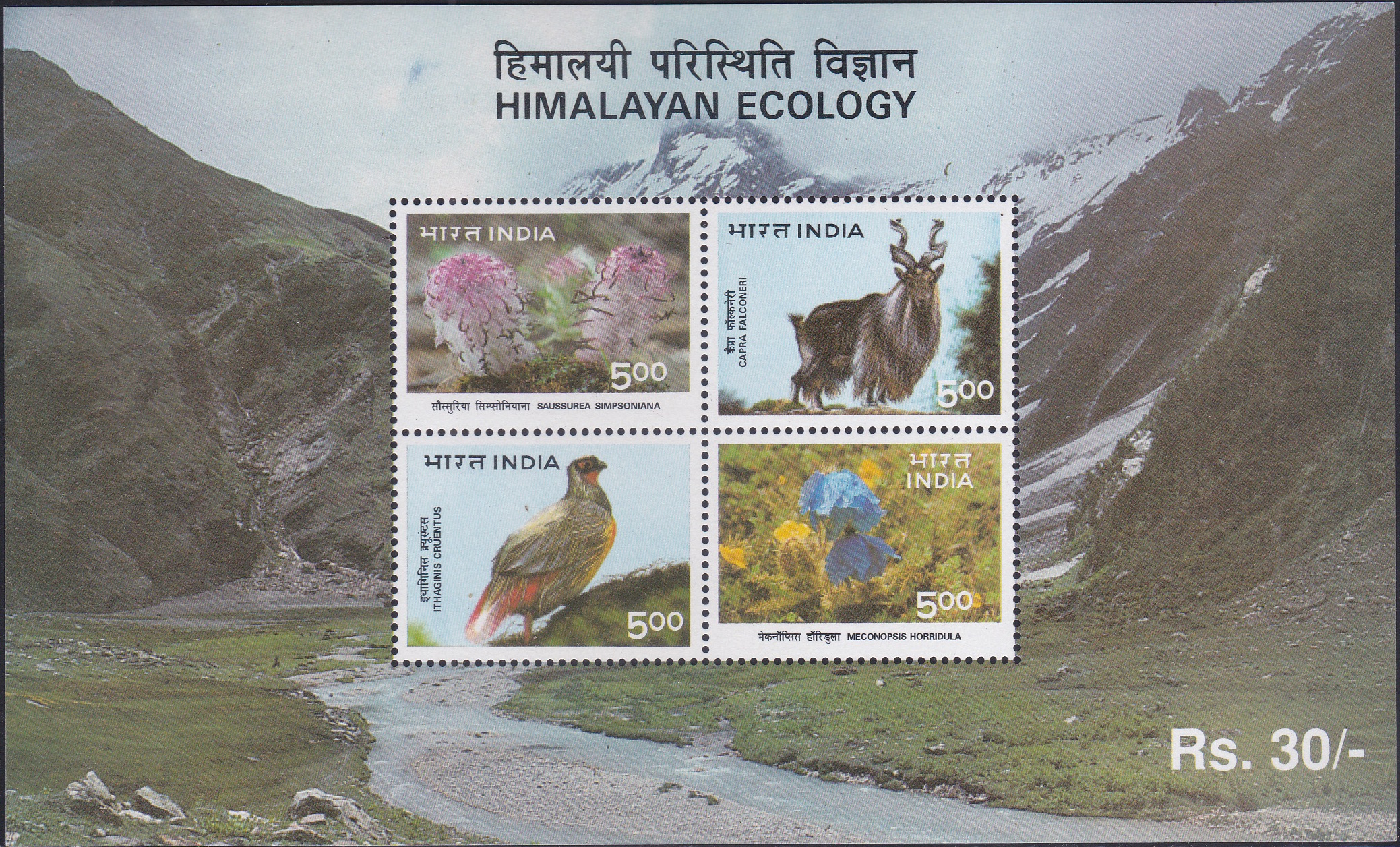 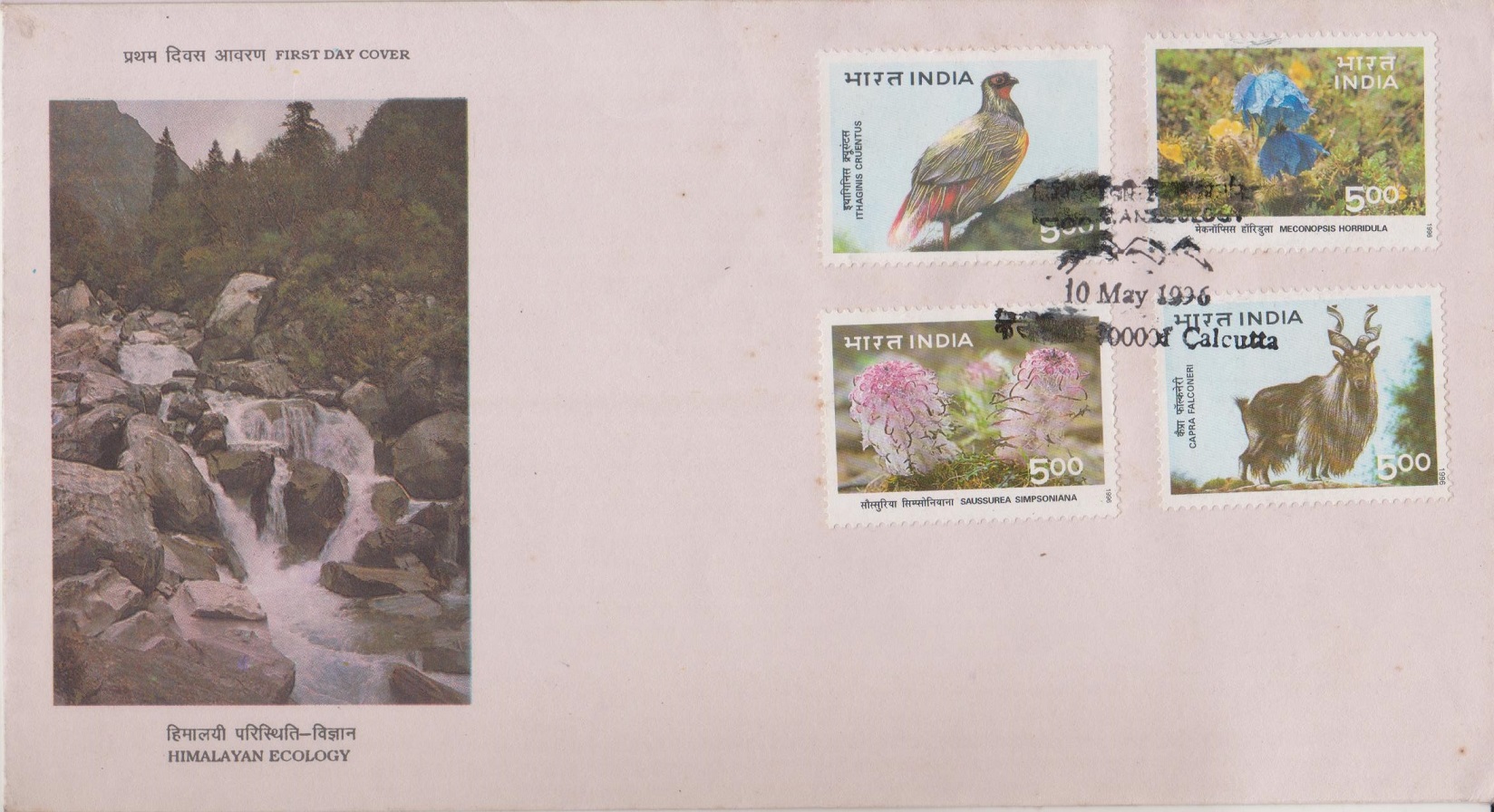 Issued for : India Post is proud to present a set of four special postage stamps on Himalayan Ecology. Each stamp highlights one rare specimen of Himalayan flora or fauna. We bring the beauty of the Himalayas to your notice in order to seek concerted effort to save it from destruction.

(i) Capra falconeri, the Markhor, found in the valley of Kashmir and westwards in the Hindukush. The old male, with its magnificent horns, a flowing beard and a generous mane from the neck and shoulders to the knees, appears almost patriarchal in its silent dignity. The winter coat of musty iron-grey turns short and red-brown in summer, growing grey with age. Females are dark fawn and about half the size of a well-grown male. Although the horns vary in different areas from the Indian to Afghan ranges, they are widely spaced with fine spirals. The Markhor therefore, while living where there are forests, keeps mainly to the open. They seldom go higher than the snow line. Their favourite haunt is precipitous crag and rock which secures them from attack.

(ii) Ithaginis Cruentus is the Blood Pheasant found in the Himalayas east of Nepal. Its bright red and black face is streaked gray above with a yellow crest and apple green below with yellow streaks. It is crimson on the upper breast, wings and tail. The female is a rich brown with scarlet around the eyes. The bird is gregarious, a strong runner, rarely flying. It feeds in open clearing and is almost tame sometimes, which leaves it vulnerable to attack. Its habitat is steep hill forest, bamboo, rhododendron and juniper scrub and it prefers snow-covered areas.

(iii) Saussurea Simpsoniana is a member of the sunflower family. Its peculiar shape with long woolly hairs look like a “yoga mudra” earning it local names like ‘Yogi Raj’ and ‘Yogi Padshah’ in Kashmir. In Uttarakhand it is commonly called “Phen Kamal”. This plant was photographed at an elevation of 4500 m on the slopes of Garhwal Himalayas in autumn.

(iv) Meconopsis Horridula is a Himalayan poppy owing its name to Greek ‘mekon’ (poppy) and ‘opsis’ (like). The plant is fiercely bristled (horridula) and bears deep azure blue flowers. Found in open stony areas at 4500 m – 5500 m in the Eastern Himalayas, this plant was photographed in late July in the Sikkim Himalayas where it is commonly called “Tsher Gnoin”.

The miniature sheet shows the Laspa Valley in the background.

The first day cover shows the Bhyundar Ganga which rises from Tipra glacier at the foot of Rataban and Ghouri Parbat peaks. It skirts the famous Valley of Flowers till its confluence with the Alaknanda at Govind Ghat, passing mixed temperate deciduous forests in its steep cascade.

Number of Stamps Printed : One Million each