India on Freedom from Hunger 1963 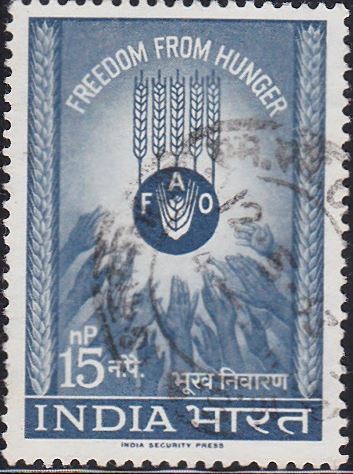 A commemorative postage stamp on the Freedom from Hunger campaign by Food and Agriculture Organization (FAO) :

Issued for : The Posts & Telegraphs Department is also issuing a specially designed First Day Cover to be released along with the issue of the new stamp.

Special First Day Cancellations are to be used at Philatelic Bureaux only.

In response to an appeal by the FAO, Government of India have also agreed to donate 100,000 stamps as their contribution to the Campaign funds.

Design : In keeping with the spirit underlying the Campaign the Posts & Telegraphs Department of the Government of India has decided to issue a special postage stamp. While the central theme for the design of the stamp was left to the countries concerned, it was desired by the FAO that a special symbol should be a common feature in the proposed world-wide issue and also that the stamp should be brought out in a popular denomination. Accordingly, the stamp to be brought out by the Posts & Telegraphs Department bears the special symbol provided by the FAO. This has some sheaves of corn above the FAO crest and the words “Freedom-From-Hunger” on top. The design of the stamp seeks to symbolise the aspirations and the struggle for the successful attainment of the objectives behind the Campaign.

Watermark : All over multiple “Lion Capital of Asoka”