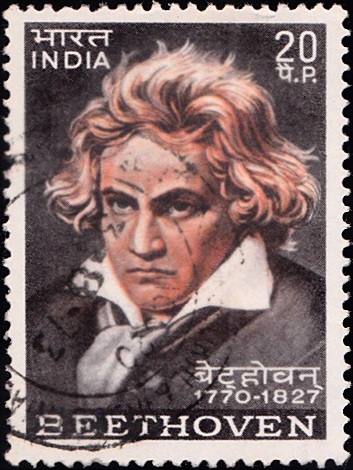 A commemorative postage stamp on the birth bicentenary of Ludwig van Beethoven, a German composer and pianist :

Issued for : This year, the whole world celebrated the 200th birth anniversary of this most famous composer. For India to honour the memory of Beethoven that year was not only a most appropriate act, but it was one more gesture cementing the bonds of friendship between the people of India and the people of Germany. The P&T Department feels privileged in bringing out a special commemorative stamp to honour one of the greatest musicians and composers of the West, Ludwig van Beethoven.

Description of Design : The design of the stamp is vertical and depicts a portrait of Ludwig van Beethoven.