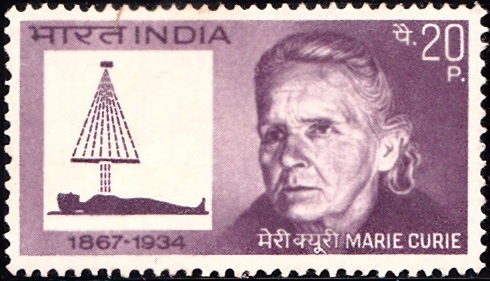 A commemorative postage stamp on the Birth Centenary of Marie Skłodowska Curie (Madame Curie), a Polish physicist and chemist, received Nobel Prize in Physics (1903) and in Chemistry (1911) :

Issued for : Science knows no national barriers. The entire world is celebrating the birth centenary of Madame Curie. The Indian P&T Department is happy to join in these celebrations by issuing a commemorative stamp in her honour.

Description of Design : The design of the stamp is horizontal. It depicts at left side a block in which a patient is shown being given a Radium treatment. A portrait of Madame Marie Curie is at the right side portion of the Stamp.