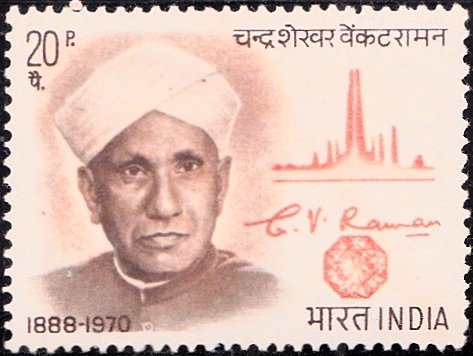 A commemorative postage stamp on the 1st Death Anniversary of Sir Chandrashekhara Venkata Raman, an Indian physicist, recipient of Nobel Prize for Physics in 1930 :

Issued for : The P & T Department are privileged to honour this illustrious son of India who helped put India on the scientific map of the modern world. The commemorative stamp which is being brought out on the occasion of his first death anniversary shows a portrait of Shri C. V. Raman with a diamond in the foreground. The First Day Cover being brought out on the occasion shows the Raman Research Institute at Bangalore.

Description of Design : The design of the stamp is horizontal and depicts a portrait of Dr. C. V. Raman.