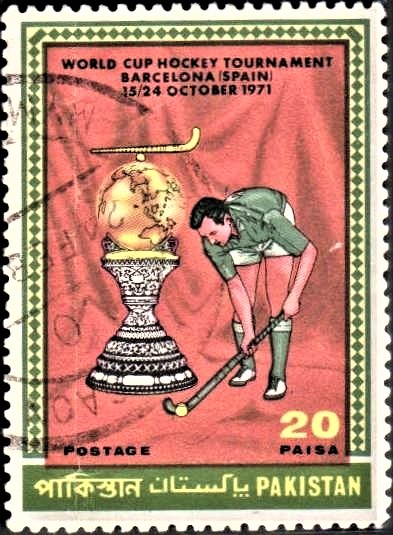 Issued for : To mark the World Cup Hockey Tournament being held in Barcelona (SPAIN), the Pakistan Post Office is issuing a Commemorative Postage Stamp of 20-Paisa denomination on 24-10-1971.

Design : The format of the stamp is vertical. A decorative border in green colour surrounds the central design, comprising the “World Cup Hockey Trophy” and a hockey player with hockey stick and a ball placed against the red drapery of the background. The words “World Cup Hockey Tournament, Barcelona (Spain) 15/24 October 1971″, and the words ‘Postage’ and ‘Paisa’ are in black. The value ’20’ above the word ‘Paisa’, and the words ‘Pakistan‘ in Bengali, Urdu and English, lying on a green strip at the bottom of the stamp are in yellow colour.