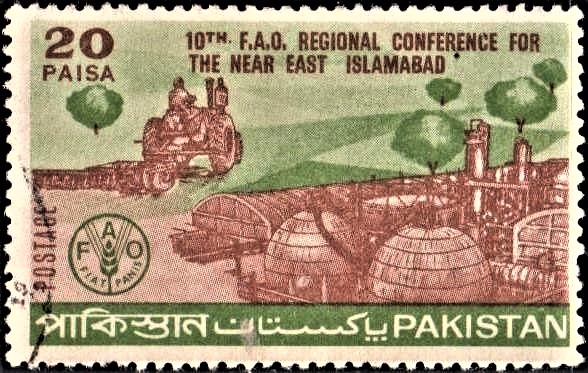 A commemorative postage stamp on the 10th Food and Agriculture Organization (F.A.O.) Regional Conference for the Near East, Islamabad :

Issued for : To commemorate the 10th F.A.O. Regional Conference for the Near East, the first conference of its kind being held in Pakistan at Islamabad from 12th to 22nd September, 1970, the Pakistan Post Office is issuing a postage stamp of 20-Paisa denomination on 12.9.1970.

Design : The format of the stamp is horizontal. The design depicts as its subject, a Tractor on the left and a fertilizer factory on the right foreground, lying against a background of fields in shades of green. The green panel at the bottom has the word ‘Pakistan‘ in Bengali, Urdu and English in reverse. The value “20 Paisa” the word ‘Postage’, the caption ’10th F.A.O. Regional Conference for the Near East Islamabad‘ at the top, the tractor and the factory are in brown. The symbol of FAO occupies the left bottom corner in green.