A commemorative postage stamp on the Centenary of the International Red Cross (1863-1963) : 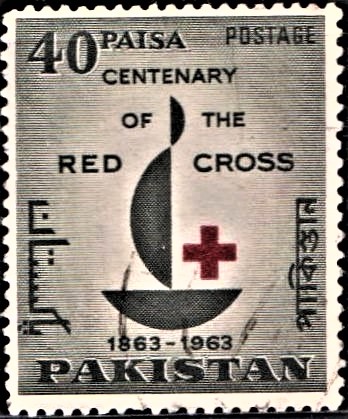 Issued for : The idea of Red Cross occurred to the Founder of the movement, HENRI DUNANT, in 1859 but the Organisation was actually established in 1863. To begin with, a Committee of five – all Swiss citizens – later to be known as the International Committee of the Red Cross, was set up in Geneva on the 9th February, 1863. On the 26th October, 1863, the first International Conference convened by that Committee met at Geneva and it was then that the Red Cross really came into being. Elaborate arrangements are being made throughout the world to mark that historic event. The City of Geneva, which is the birthplace of Red Cross, will be the venue of international celebrations. The Pakistan Red Cross intends to commemorate the centenary of the foundation of Red Cross with great enthusiasm. The Pakistan Post Office has issued this stamp to commemorate the occasion.

Design : The Design has been prepared by the Pakistan Security Printing Corporation Ltd., Karachi, under the guidance of the Director-General, Pakistan Post Office.

The emblem of Red Cross Centenary appears in the Centre in Greenish Grey and Cross in red with dates “1863-1963” underneath the emblem. The word “PAKISTAN” in English appears at the bottom while in Urdu and Bengali at the left hand and right hand side respectively in vertical position. On left top is the denomination and on right top is the word “POSTAGE”. The words “Centenary of the Red Cross” also appear on the stamp.