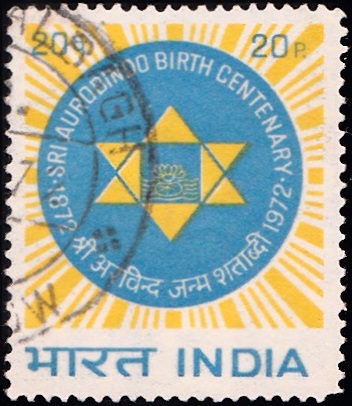 A commemorative postage stamp on the Birth Centenary of Aurobindo Ghose, an Indian Bengali philosopher, yogi, guru, poet and nationalist :

Issued for : The Posts and Telegraphs Department are privileged to bring out a special stamp commemorating the birth centenary of this honoured son of India.

Description of Design : The design of the stamp is vertical and depicts the symbol of Sri Aurobindo. The sun around the symbol represents the supermind.

Designed by : The stamp was designed by Shri Jayantilal Parekh of the Pondicherry Ashram.

Died on Dec 5, 1950 at Pondicherry, French India [now in Puducherry]