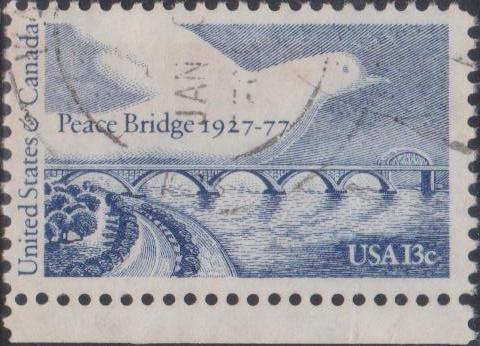 A commemorative postage stamp on the 50th anniversary of the Peace Bridge, connecting New York with Fort Erie, Ontario :

Design : This U.S. 13¢ stamp commemorating the 50th anniversary of the Peace Bridge was designed by Bernard Brussel–Smith of Bedford Hills, New York.

A U.S. 3¢ stamp depicting an old U.S.-Canada Bridge known as the Niagara Railway Suspension Bridge was issued in 1948 to commemorate friendship between the two great nations. A 5₡ stamp depicting a bridge at Niagara Falls was issued in conjunction with the Pan-American Exposition at Buffalo in 1901. Thus, three stamps featuring bridges over the Niagara commemorate ties between Americans and their friends to the north.