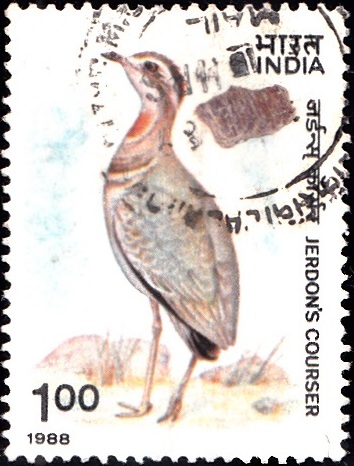 Issued for : This year the Department of Posts is issuing a single stamp on the Jerdon’s Courser (Cursorius bitorquatus) one of the rarest birds in the world.

Description of Designs : The stamp showing the Jerdon’s Courser is prepared by India Security Press on the basis of a design provided by the Bombay Natural History Society. The first day cover shows a well-known photograph of Dr. Salim Ali obtained by courtesy of the Oxford University Press. We are also carrying the WWF logo on the FDC. The cancellation is by Smt. Alka Sharma.