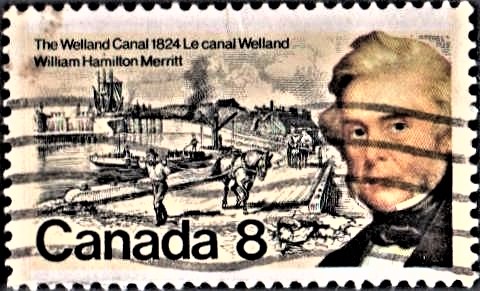 A commemorative postage stamp on the Sesquicentennial of the start of construction of the Welland Canal between Lakes Ontario and Erie, a project conceived and supervised by William Hamilton Merritt :

Issued for : The Post Office will honour William Hamilton Merritt “the father of Canadian transportation” on the one hundred and fiftieth anniversary of the start of construction on his greatest project, the Welland Canal between Lake Ontario and Lake Erie.

Design : The stamp in honour of William Hamilton Merritt was designed by William Rueter. The portrait of Merritt is taken from an oil painting by Robert Whale (1805-1887). Whale painted this portrait around 1860 and it originally hung in his home “Oak Hill”. The painting is presently held at the St. Catharines Historical Museum. The view of the Welland Canal is a steel engraved interpretation of an original wood engraved illustration “Lock No. 23 Thorold”. The illustration is taken from George Monro Grant‘s “Picturesque Canada” published in 1882. This work was illustrated under the supervision of L. R. O’Brien and the wood engraving itself was executed by Schell & Hogan.