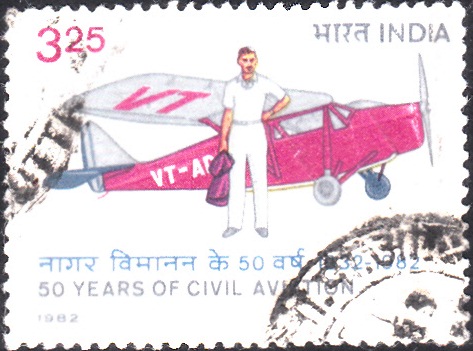 A commemorative postage stamp on the 50th Anniversary of the first civil aviation service between Karachi to Bombay in a Puss Moth by JRD Tata, father of Indian civil aviation :

Issued for : The Posts and Telegraphs Department is privileged to issue a commemorative stamp on 50 years of Civil Aviation in India.

Description of Designs : The stamp, designed by Air India, depicts J.R.D. Tata against the background of his aircraft ‘Puss Moth’ which was flown by him on 15 October, 1932 from Karachi to Bombay. The first day cover shows Puss Moth, Air India 747 and Indian Air Lines AB-300. Cancellation has been designed by Charanjit Lal.