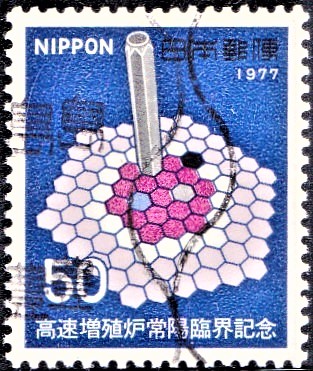 A commemorative postage stamp on the Attainment of Criticality of the ‘Joyo’ (nuclear reactor), Oarai, Ibaraki prefecture, Honshu island, Japan :

Issued for : A postage stamp was brought out to commemorate the attainment of criticality of the first Japanese experimental fast breeder reactor named “Joyo” at Ōarai, Ibaragi prefecture. The construction of “Joyo” was started in 1970.

It is the first time that Japan has succeeded in this big development project entirely with its own technologies.