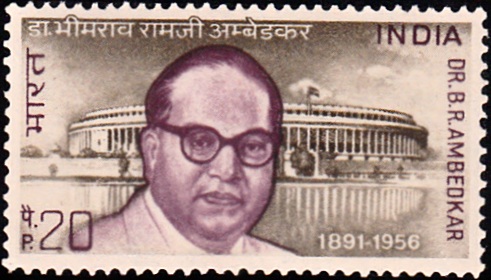 A commemorative postage stamp on the Birth Anniversary of Dr. Bhimrao Ramji Ambedkar, 1st Minister of Law and Justice in India (1947-51) and Chairman of the Constitution Drafting Committee (1947-50) :

Issued for : His memory is cherished like an avatar by the whole of the Depressed community. Dr. Ambedkar, whom history will undoubtedly reckon amongst the great emancipators of humanity will be a source of inspiration to the nation in its march towards the goal of social equality. The P & T Department feels honoured to bring out a commemorative stamp of this great son of India during the 25th year of the country’s Independence.

“Glory to those who would keep on their struggle for the Liberation of the enslaved in spite of heavy odds, carping humiliations, storms and dangers till the down-trodden secure their human rights.” – Dr. Ambedkar.

Description of Design : The design of the stamp is horizontal and depicts the portrait of Dr. B.R. Ambedkar. The Parliament House is seen in the background.

The design of the stamp is adapted from the original prepared by Shri Charanjitlal, Artist, Posts & Telegraphs Directorate, New Delhi.