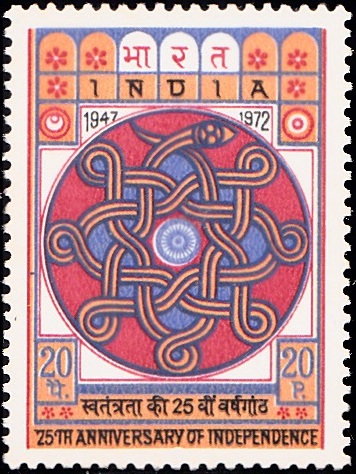 Complete Set of 2 nos of commemorative postage stamps on the 25th Anniversary of the Indian Independence from British colonial rule in 1947 : 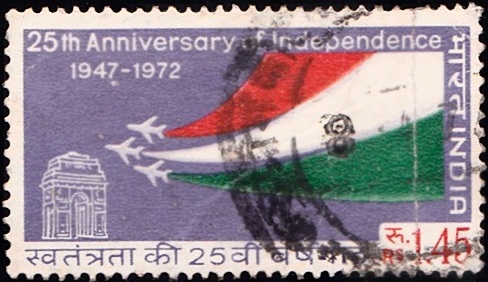 Issued for : On this occasion, the Posts & Telegraphs Department pays its humble tribute to all those who valiantly struggled for Independence and the nation’s honour and to those who have toiled ceaselessly in various spheres of nation-building activities.

Description of Design : The stamp of denomination 20P. is vertical and shows the “Ashoka Chakra” interlocked by a Naga, symbolising how democracy is well protected in this country. Shri Jyoti Bhatt, Artist, Baroda has designed the stamp.
The stamp of Rs. 1.45 denomination is horizontal and shows three Gnat Planes flying over India Gate, emitting three-coloured smoke corresponding to the colours of our National Flag. The design is by Shri Sushil Kumar Choudhury, Artist, India Security Press, Nasik Road.