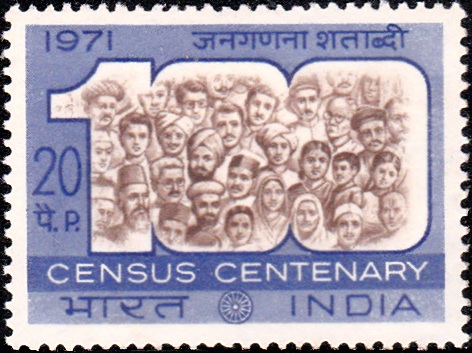 A commemorative postage stamp on the 1971 Census of India :

Issued for : The Posts and Telegraphs Department is happy to associate itself with the centenary of the regular decennial census in India by issuing a special postage Stamp to commemorate the 1971 census. This stamp is dedicated to the vast army of enumerators who are responsible for the census and to the people of India without whose cooperation in this national undertaking, the task of enumeration will not be possible.

Description of Design : The design of the stamp is horizontal and depicts a cross section of the people of India within the figure one hundred, representing the census centenary.