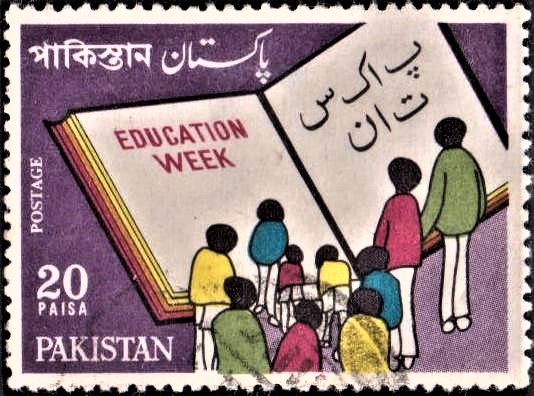 A commemorative postage stamp on the International Education Week :

Design : The stamp is horizontal in format. The main theme of the design is ‘Education for the masses‘. A group of people, adults and children clad in yellow, green, blue and red dress are shown standing in front of a large open book. The right page of the book bears the Urdu Alphabets in black to form the word ‘Pakistan‘, while the left page bears the wording “Education Week” in red.

The word “Pakistan” in Bangla and Urdu appears at top left side in reverse against a mauve colour background, while ‘Pakistan‘ in English appears on the lower left corner also in reverse.

The denomination figure ’20’ with ‘Paisa’ appears underneath just above the word ‘Pakistan‘ also in reverse.

The word ‘POSTAGE’ is placed along the left side of the stamp in reverse form.